You are using an outdated browser. Please upgrade your browser to improve your experience and security.
Home > Projects > GSDC Medal

In 2002, the GSDC established the GSDC Medal to celebrate innovation and leadership in the management of the Great Southern’s natural resources. Past medallists include scientists, community leaders, environmentalists, educators and farmers.

Originally an annual award, the GSDC Medal is now awarded biennially. In alternate years, the work of the medal winners is showcased at a field day.

2002: Ross Williams, a farmer and community leader from Gairdner who was instrumental in the Fitzgerald Biosphere Group
2003: Jean Webb, a farmer and community leader from Narrikup with a focus on landcare
2004: Clive Malcolm, a saltland agronomist from Denmark
2005: Keith Bradby, a landcare and conservation advocate, from Albany, leader of the Gondwana Link project
2006: Louise Duxbury, a landcare and environmental restoration leader from Denmark
2007: Geoff Bee, a farmer from Jerramungup with a focus on sustainable practices
2008: Russel Thomson, a farmer from Woodanilling who pioneered landscape drainage work
2009: Susanne Dennings, a community leader from Ongerup who was instrumental in malleefowl preservation
2010: Geoff Woodall, from Albany, a research biologist and farmer who focuses on biodiversity, native plant industries and native food cultivation
2011: John Moore, a scientist from Albany with innovative approaches to weed management
2014: Gary Muir, an innovator and educator from Walpole, with a focus on dieback control
2016: Geoff Bastyan, researcher from Albany who pioneered seagrass restoration techniques
2018-19: Ian Walsh, a farmer from Cranbrook who displayed innovation and leadership in using salt-tolerant plants to reclaim land degraded by rising salt
2021: Bev Lockley, an environmental change agent in Katanning, active in landcare and environmental education

A $5,000 grant is awarded to the recipient of the sterling silver medal, and the two runner up finalists for the medal each receive a $1,000 grant. The grants support the recipients to continue further work in their field. 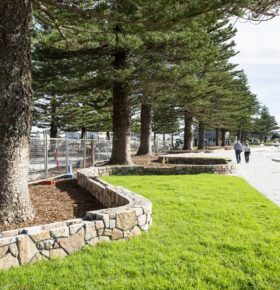